Recently I’ve been thinking about what the ideal developer environment looks like to me and tried to implement some of those thoughts at Famly.

We've open-sourced a version of our internal tool for automating our developer environment a Famly Check out famly/plan.

This is of course rather abstract, so here are some very concrete goals.

This is a rather tall order, but I think we’ve come pretty close at Famly. There are two parts to the solution. We’ve decided to rely on Docker to run services locally, so for each service we’ve defined a specialized Dockerfile for running the service during development. Secondly we’ve created a script, famlydev, for managing the local developer environment. First off I’ll introduce famlydev and then I’ll show the patterns we’ve arrived at for creating Docker images that work well for development. 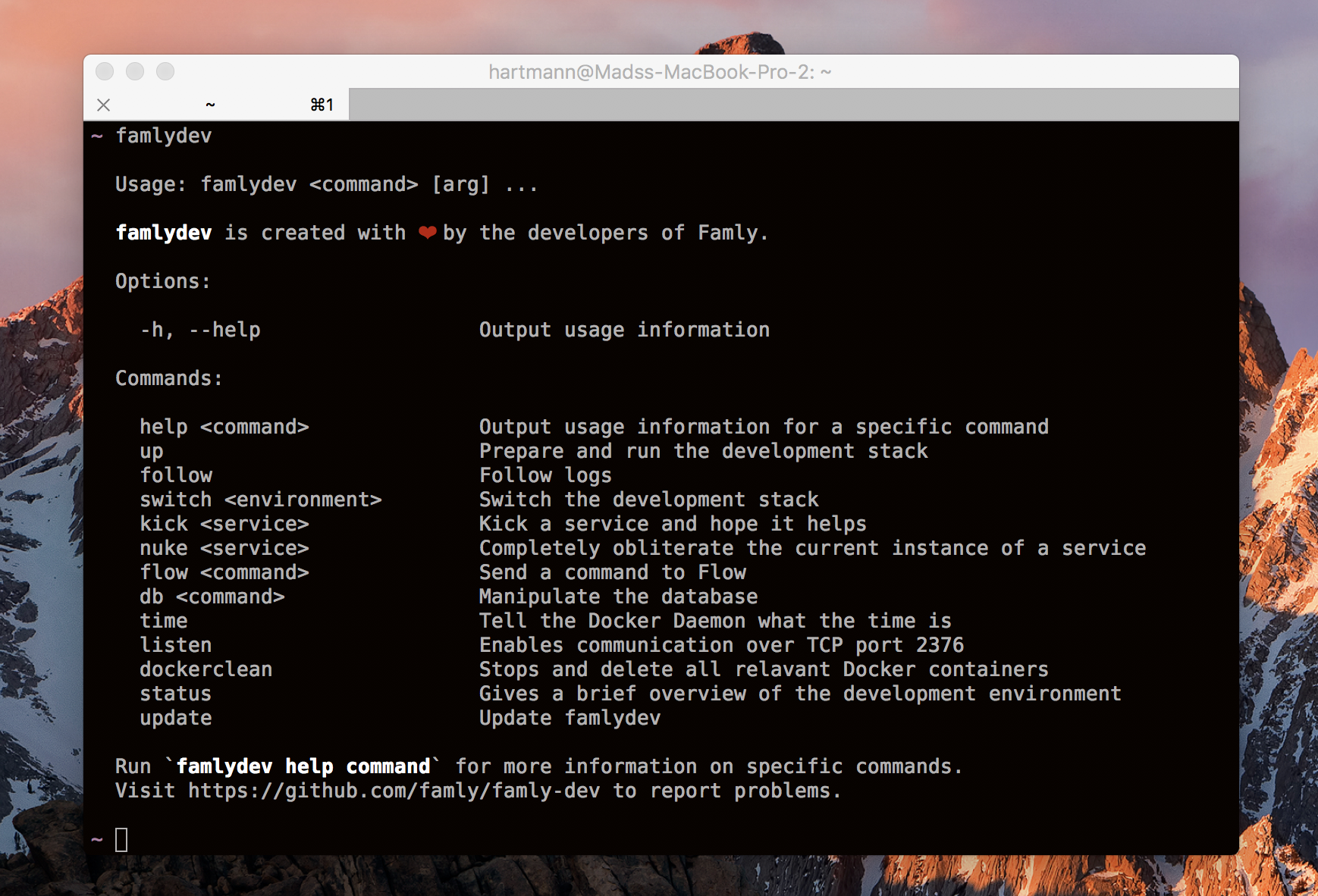 It consists of a rather small Makefile, a collection of Bash scripts, and a very small README. The Makefile take care of cloning the relevant Famly repositories, installing various system dependencies (such as Docker and the docker-rsync gem) as well as installing our home-grown famlydev script which is the developers interface to the developer environment. It also knows when to rebuild the various Docker images. This is how we’ve achieved the 100% automated setup.

The repository also contains a collection of docker-compose.yml definitions. Currently we have one for each common use-case and you can switch between them using famlydev switch fullstack|frontend|backend. This is how we’ve made it optional to run some services locally. For now having these predefined configurations works well for us but I can imagine that in the future we’ll want to make it easier to pick and chose which services to run.

I think having a script like famlydev is a crucial part of creating a great automated development environment. It also makes it easy to share automated work-flows. As an example, the other day my coworker Christian added a new command db which for now has one use-case, famlydev db regen, which will nuke the current database and re-run migrations to provide a clean database. To make famlydev easier and more enjoyable to use we’ve implemented context-sensitive tab-completion (just for ZSH for now) – that is famlydev kick <tab> will tab-complete based on the services you have running – and you can get more information about each command using famlydev help <command>.

For each service we’ve created a Dockerfile. These Dockerfiles are slightly different from ones you would normally create for a production environment. They only install the required system libraries and don’t contain any of the source code or library dependencies (though we do warm-up the relevant caches so you don’t have to wait for yarn, or similar tools, to finish downloading whenever you boot the service). The images are empty shells that only work if you mount in the source code from the host – I’ll get to why we’ve chosen this approach later.

Each service has an entrypoint script which generally follow the same structure.

This approach is working nicely for us. The advantage of not having baked very much into the images is that we can re-use a running container in many different environments. For example you can switch between the master and staging branches and the container will perform the necessary steps. This means that for the most part you don’t worry about the containers. You simply run famlydev up in the morning and famlydev down when you leave. You can keep switching branches, adding library dependencies or changing the source code as you always have.

The current state of famlydev is the result of roughly 2 months of experimenting with various solutions. So far I’m happy with the approach of using Make for setup and dependency tracking, docker-compose for configuring which services to run, and Bash for providing the developer with an enjoyable CLI.

I have no doubt that over the next couple of months we’ll continue to improve it and try out new things. I’ll keep you posted. If you’ve done something similar, or solved the same problems in a different way I’d love to hear about it.